Favignana and its beauties

The largest island of the Egadi islands, Favignana is also known by the name of Aegusa (from the Greek “island of the goats” because of their abundant presence).

One of the distinguishing features of the island is certainly its appearance, similar to a butterfly: in the Seventies the painter Salvatore Fiume nicknamed it “the great butterfly on the sea”.

Favignana is certainly one of the most requested seaside resorts, if from a naturalistic-landscape point of view it offers all the colors of the Mediterranean, ranging from the blue sea to its crystalline waters, from its golden beaches, to the breathtaking seabeds, to the exciting sunsets, from an archaeological and cultural point of view, it is possible to count the enchanting Palazzo Florio, a building that hosted illustrious personalities of the period during the mattanza period, and which, built at the end of 800, alternates the neo-gothic style for what it concerns the external part of the Art Nouveau style of the interior furnishings. 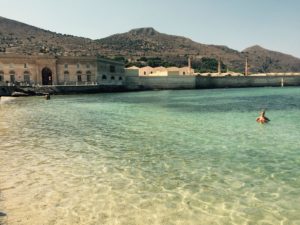 The former Florio plant, which wrote the history of this wonderful island: in ancient times a real tonnara with adjoining establishment for the conservation of fish, and which turned out to be a real source of economic subsistence for the inhabitants of the island.

It became a museum in 2009 collecting prehistoric finds, dating back to the Roman era, and, if nothing else, the history of the same Florio family, the testimonies of those who worked for the same and much material on tuna processing and the life of tuna.

Finally, but not less important, mention must be made of the castle of Santa Caterina, of the Norman period, built in the place where, during the Saracen domination, a sighting tower existed, today a place from which it is impossible not to enjoy a breathtaking view; the caves, real archaeological sites of interest, the splendid and impressive tuff quarries, symbol, in ancient times, also these, of subsistence of the island.

And if, once the economic activity of the island 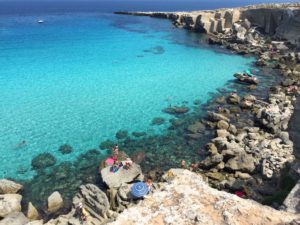 es, including Cala Azzurra, certainly the more known and easily accessible or Lido Burrone, absolutely recommended for families with children.

Punta Sottile are instead places suitable for snorkellers, thanks to their succession of coves and small coves

And finally we can not fail to mention Cala Rossa, the most famous and, without any doubt, one of the most beautiful in Italy.